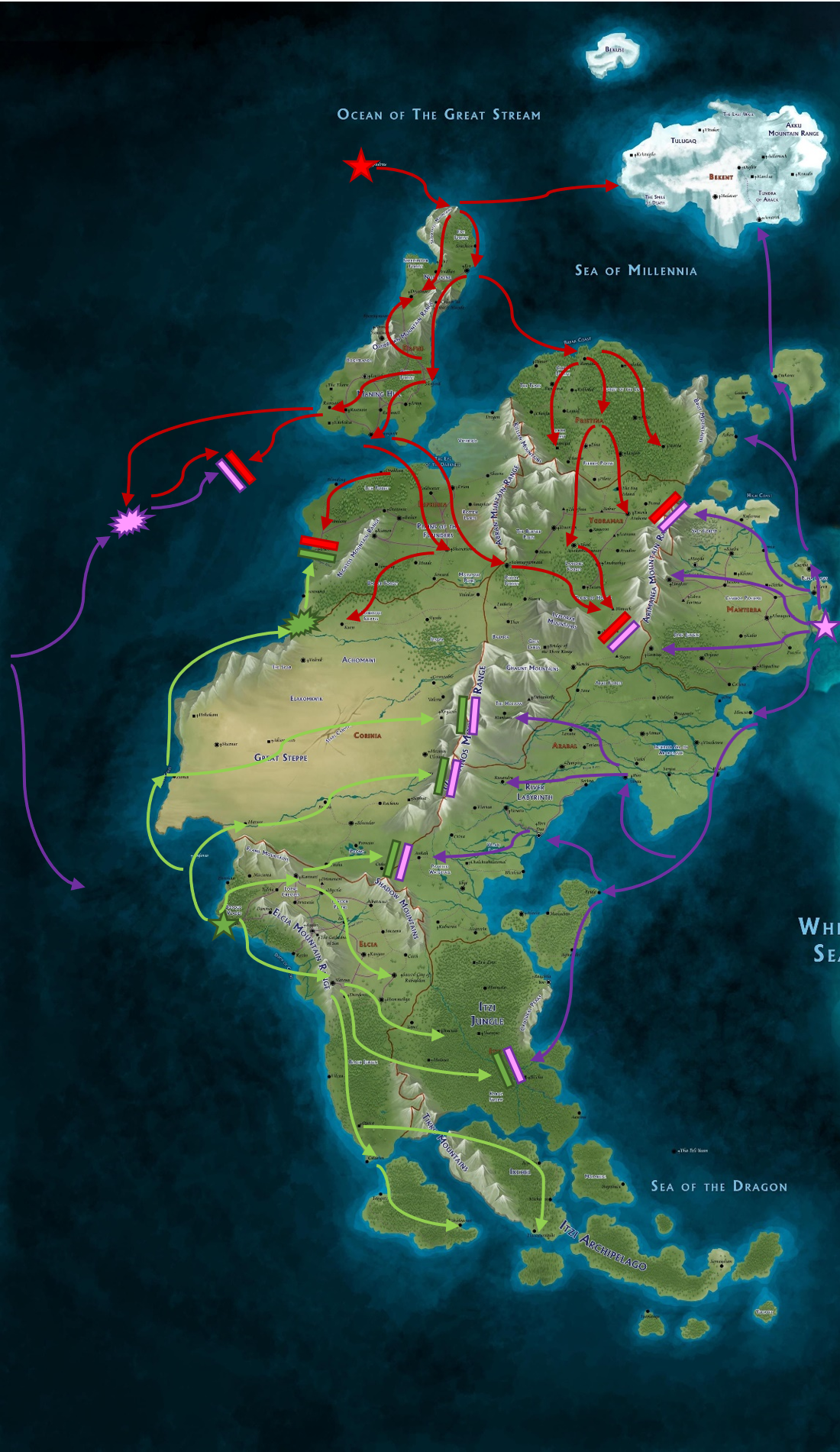 Congratulations to Mara who has claimed the title of Empire Deluxe Champion for 2021.  After two narrow but well-played victories, and a partial win on our third play-through, he will carry the torch for 2022 until we meet again next December.  In this post, I will show the highlights for our third and final game and the post game discussion.  However, I will defer on announcing the changes for EDTC to a future post.

As is tradition, we are using the Tournament Scoring rules which are available in the strategy guide. Any set matches declared by a player will be shown in Black in the summary provided and any player-specific information will be shown in the color they chose during the initial setup.

This game starts with Mara having won the last two games.  Holak is in a close second place, but would require a decisive win if she was to take the title.  Inevitably, this game remained unfinished but was enough to determine who would be crowned our champion.

There are three contestants for this year’s championship title. The draft of positions is as follows:

Below is the battle map showing the order of major events. Stars indicate main locations and capitols. Lines indicate movement of major forces. Explosions indicate a major set match battle or a decisive victory with color representing the winner. Two parallel bars represents an inconclusive engagement, or an incomplete set match at end of game.

The game started after an agreement that alliances would not be allowed.  This change is due to Mara having a two-game lead going into Game Three.  This time Holak chose to start in Dafne, a position that has not worked well for the last two players.  Dyn starts in Elcia and is the first player to select this position.  Mara takes a strong defensive position on the islands in Manterra.

Dafne had the strongest start of our three players using a Hail Mary Strategy with transports moving small numbers of infantry to capture key cities.  By the end of the early game, Dafne would have troops landed in three different regions, with Pristina and Espheria captured by early mid-game.

Elcia opted for an ASL Strategy focusing on capturing Corina and Itzi.  While not as effective as Dafne in early game, he used an Infantry Slog Strategy to occupy positions in the Umbranos Mountains which prevented Manterra from obtaining defensive strongholds along the border.

Manterra had the slowest start of all players, choosing to capture only defensive positions over quick expansion.  He focused on occupying all of the islands along the White Sea and moved inland to occupy Arabas.  However, he was the only nation who had not fully captured a region in the early game, putting him in last place for the point standing.

First blood occurred at the Battle of Ankah.  Manterra’s small expeditionary force stopped Elcia’s eastward expansion but forced both sides to entrench at Ankah.  At this point, the Battles of the Umbranos Mountains would start and continue throughout the rest of the game.  This conflict was indecisive, but left Elcia in charge of the mountain range.  This meant Elcia would be free to conduct raids into Arabal for the rest of the game and Manterra would be forced into a permanent defensive position, using the river networks to act as defensive barriers for any Elcia advances.

In the north, Dafne became the first player to capture four prosperous regions – Dafne, Espheria, Pristina, and Ygdramar.  The Battle of Prana stopped Manterra’s attempt at invasion after their forces were pushed back through the Arimanea Mountains and ultimately into a defensive position at the Salt Forest.  Dafne was unable to flank the forces located there as its navy had been sent to Bekent.

Manterra struggled to gain a foothold during the mid-game as he found all of the avenues to expand blocked by an opposing player.  After fortifying the Salt Forest and the River Labyrinth, Manterra shifted focus towards its naval position in attempt to block the last avenue to invade his homeland.

Late game began with the Invasion of Greseword which displaced Dafne’s forces which retreated to the Malgar River. Here they fought to a standstill as the Battle of Osborne.  When the cease fire was declared, Osborne was still in the hands of Elcia but due to extended supply lines could not advance further.  As a result, Dafne would maintain control of Espheria for the rest of the game while Elcia was at the mercy of sea-based reinforcements for the rest of the game. Dafne understood this and began construction of large cruiser task force to attempt the Blockade of Osborne.

It’s not often that the strategy of building a Fleet in Being is an effective winning strategy.  However, Manterra was in a unique position where the avoidance of a decisive victory would mean victory in the overall championship.  It would take 150 turns before the Manterra fleet was finally located.  It was purely an accident, spotted during a Dafne submarine sweep attempting to located Elcia transports bound for Osborne, Dafne’s Cruiser Task Force blockading Osborne was dispatched to hopefully gain the decisive win over Manterra that would determine the winner of the championship.

The Battle of Osborne Sea was the engagement of Dafne’s cruiser fleet against the similar sized Manterra fleet.  Ultimately, Dafne was forced to withdraw after sinking only two cruisers, and losing none of their own ships.  The Dafne submarine screen detected a fleet of Elcia capital ships entering the area.  Fearing a three way naval battle that could easily go agaisnt them, Dafne’s plan was to have Elcia and Manterra destroy each other first, and then the Dafne fleet would mop up the victor.  This would allow her to defeat both opponents at the same time.  Unfortunately, Elcia’s fleet was ignorant of the Battle of Osborne Sea and merely an escort force meant to engage the blockade ships while transports headed to Osborne.  It never located the Manterra fleet and the battle never happened.  The ploy by Dafne had failed.

Dafne re-formed at Kaohikia and forced the Manterra fleet to eventually turn back.  At the same time, the Battle of Osborne was a stalemate and it was clear that Dafne’s position would remain solid for quite some time.  The only action still occurring was from raids in Arabal from the Umbranos Mountains.  With all sides digging in for a long game, the group decided nothing more could be gained and the game was stopped at turn 977.

This game was a must-win for Holak.  Mara’s strategy was simple, avoid a decisive defeat at all costs because it was the only way he could lose the tournament by overall points.  Instead of going for a sweep (winning all three tournament games) it was clear that Mara was playing it safe and going to play defensively.  Holak’s one chance to win a decisive victory was ultimately thwarted twice by Dyn, who, first, failed to engage Mara at the Battle of Osborne Sea.  The second was the stalemate at Osborne which meant Holak was going to be the ultimate victor of this game, but could not beat Mara’s overall point lead without 200 or more turns of gameplay.

Thus this game goes to Holak, with Dyn in a close second place.  Both would have likely eliminated Mara if the game had gone longer. but Mara had accumulated enough points to secure the tournament points in his favor and there was no reason to continue playing as a result.

The Monday after our tournament ended, we discussed performance.  We all agreed that Holak played the best out of all three players.  She had the most consistent performance on all three games.  She is also the newest addition to the EDTC community, having only been with us for two years.  This was a noteworthy accomplishment which we all wanted to point out.

Dyn re-joins us after a five year hiatus.  This was his first tournament game on EDCE, as his previous tournaments were all on Legacy Empire Deluxe.  For his first EDCE, he had a decent performance.  The fact that he was a relevant threat to the eventual winner of each game is a testament to his reputation as a kingmaker.

Buy ultimately, it would be disingenuous to take the honor of Tournament Champion away from Mara.  He played a risky game, but ultimately his gamble paid off every time.  In Game One, his decision to force an early end allowed him to win by one of the thinnest margins we have ever recorded.  In game two, he claimed another narrow victory after a decisive naval victory put him over the top.  And finally, in game three, he came in dead last but protected enough points to ensure he could not be topped by Holak in the overall scoreboard.

In summary, Mara’s strategy was to win the tournament, not the individual games.  However, Holak is clearly an up and coming threat and we look forward to seeing how she plays next year.  We are also pleased to have Dyn back with us and look forward to playing with him again.

With that, I want to congratulate Mara for his win.  The group agreed that his two victories playing as Itzi Jungle should be the legacy we remember him by.  As a result, his place on the Board of Champions will be changed to Itzi in honor of his accomplishment.

See you all next year!