After Mara’s risky win in Game One, we now move into Game Two of our year-end championship.  In Game Two, players opted to include the Capitol Kill victory condition although it was not put to the test due to some expert defensive play.  This game took a day and a half to complete and had some of the largest scale battles seen this year.  The results were close once again, but may ultimately hint at who will win this year’s title of Empire Deluxe Champion.

As is tradition, we are using the Tournament Scoring rules which are available in the strategy guide.  Any set matches declared by a player will be shown in Black in the summary provided and any player-specific information will be shown in the color they chose during the initial setup.

We had a late start to this game due to issues with the Moderator utility not loading properly.  However, once loaded there were no false starts.  There are three contestants for this year’s championship title. The draft of positions is as follows:

Below is the battle map showing the order of major events. Stars indicate main locations and capitols. Lines indicate movement of major forces. Explosions indicate a major set match battle or a decisive victory with color representing the winner. Two parallel bars represents an inconclusive engagement, or an incomplete set match at end of game.

All three of our players had slow starts during the Early Game.  Dafne managed to come out on top for the second time in a row.  He opted for an ALS Strategy this game. When the scores were tallied, an invasion into Espheria was in progress giving him an advantage in manpower.

Itzi was in second place as he implemented the A4X Strategy.  Unfortunately, the forested and sparsely populated areas in Itzi means he was only gaining the expansion bonuses in Arabas.  Moreover, Itzi’s focus in early game was sea expansion, collecting a network of port cities that would play an important role in late game.

Pristina had the slowest start of our three players as one would expect with a mountain start.  She used the ASL Strategy but the peaks slowed early game expansion into Ygdramar and instead built an expeditionary force to capture Bekent.  That said, the ASL Strategy is famous for its exponential growth in mid-game and she was setting herself up to have the most productive empire be the end of the game.

First blood occurred during a surprise skirmish at the Battle of The Tears.  Pristina beat an advanced invasion fleet from Dafne using a Three Tiered Coastal Defense strategy.  The win secured the entire area of Pristina, from Killian Mountains to the White Sea.  Dafne was able to use the remnants of the fleet to secure a blockade just outside of Pristina’s fighter perimeter, and thus limited the sea expansion of Pristina to southern waters for the remainder of the game.

Thus, Pristina focused on expanding south.  Unchecked by Dafne on land, she was able to capture all of Ygdramar, Manterra, and half of Arabal.  Meanwhile, Itzi made a voyage across The White Sea, eventually landing at Ziorca, securing the Great Steppe and Corina for Itzi.  The move was a pincer that secured everything south of Arabal under Itzi control.

Pristina and Itzi naval forces finally came to a head at the Battle of Vallaver. Pristina’s fleet was forced to pull back after taking moderate losses, but Itzi’s fleet had taken heavy damage and could not pursue them into hostile territory.  The battle was a draw, but it effectively checked Pristina’s ability to expand by sea in any direction.  Itzi couldn’t capitalize on the win because it had overextended its land expansion, having to return all the way to Port Dux for repairs.  Pristina continued its land advance, capturing the Interior Sea of Arabalaste, while never again challenging Itzi’s control of the White Sea.

The final battle of the mid-game occurred when Dafne attempted to invade Vithrigo.  Pristina was quietly building a network of defensive structures in the Killian Mountains, intending to to flank Dafne’s position at Espheria in late game.  The landings would be called The Dregon Landings, and the second half of the battle called the Battle of Killian Mountains.  Together, these two battles were a disaster for Dafne who was forced to send their transports into heavy fighter screens in the extreme left flank of the Three Tiered Coastal Defense from The Tears, landing troops against hidden bomber bases in the Killian Mountains, and finally a flood of Pristina Engineers and Armor who tunneled their way from the Robur Forest.  Dafne had to divert everything they had to stop Pristina from overrunning their position and came close to allowing a breakthrough that would have cost them all of Espheria.  The battle ended with a cease fire agreement that left Pristina firmly in control of Vithrigo.

It wasn’t just a costly defeat for Dafne. it expedited Pristina’s planned invasion, forcing them to divert troops from the southern front against Itzi, causing both sides to enter a deadly war of attrition which Dafne could not afford.  In post-game analysis, it was this battle that was the turning point and decided the winner.

The stage was set for a powerful finish.  No secret surgical strikes were going to end the game this time.  Large scale set matches occurred in almost every sector.

Itzi controlled The White Sea and was building a large invasion fleet with its eyes set on Dafne’s home island.  Unfortunately, an expeditionary force was spotted and destroyed at the Battle of Bloomport.  Until this moment, Dafne’s sole naval focus was on the blockade of Pristina, which he saw as the main threat.  Itzi had lost the element of surprise and Dafne dispatched a large cruiser and battleship force from the Sea of Millennia to its western coasts.

This was the break Pristina had been waiting for.  Pristina’s early game decision to capture Bekent allowed it to build a strong naval force in secret in the northerly island, outside of the blockade.  The withdrawal of half of Dafne’s capital ships from the Sea of Millennia, noticed by the fighter screens at the Break Coast, caused Pristina to activate the carrier force from Bekent, linking up with a submarine force from Brut Mountains.  The engagement would be called the Break Coast Blockade.  Half of Dafne’s naval blockade force was destroyed before it retreated to safe waters to protect the large transport force at Eve. It was a clear victory for Pristina who could now operate safely in open waters again.  Dafne’s decision to split its force in two had caused it to be too weak to stand up to even the weakest naval power in the game.

But worse was to come.  Itzi, aware it had lost the element of surprise, re-organized its fleet and withdrew its transport task force.  Itzi then feigned a retreat, moving its depleted destroyer force, remnants from the Battle of Bloomport, at half speed to give the impression it was damaged.  Dafne’s fleet of capital ships smeled blood and followed in pursuit, looking for an opportunity to destroy Itzi’s fleet, but instead was heading into a trap.  The Battle of Osborne Sea was the result once the trap was sprung, when the retreating fleet linked up with a large battle fleet from Port Dux, surrounding Dafne’s fleet with superior numbers.  The entire Dafne surface force was destroyed, most sunk by a combined submarine and destroyer fleet, with a cruiser/carrier force in reserve to sink any stragglers.  The only survivor was a lone cruiser that limped back to Bloomport.  The once impressive Dafne navy had been utterly destroyed.

The only remaining question would be who could capitalize on Dafne’s naval demise.  Itzi and Pristina engaged in the Battle of Arabal which would result in a stalemate over a wide front.  Superior artillery positions made advances next to impossible on both sides.  The battle was a demonstration what was to come between the two continental powers – a slugfest with no clear winner.  Itzi could have landed its force at Raduh but, following the victory at the Battle of Osborne Sea, decided to conduct the Landings at The Thorn and secured a beachead of Dafne’s home island.  Dafne was set to easily re-capture the area as Itzi’s upply lines were too long to sustain its position.  On the Sea of Millennia, where the remnants of Dafne’s fleet were located, Pristina would have a difficult time overcoming Dafne’s position, requiring a massive naval buildup to overcome Dafne’s air supriority along its coast.

It was this point when the game was called.  No more meaningful scores could be gained at this point since every front was stalling.  When tallying points, it was a close one again. The game’s future outlook was clearly in Pristina’s favor as they had a commanding lead on overall production and would have the best chance of securing one of the victory conditions.  However, when the points were totaled, it was Itzi’s naval victories the once again allowed them to win the game by a fraction of a point.

This game is Mara’s second victory of the championship, but it was another close call.  Had the game continued longer, Holak would have likely overtaken Mara at some point.  It would have required more than a hundred turns though, and the game was already at a crawl.  Ultimately, Dyn was the kingmaker here.  If Holak hadn’t been forced to redirect the forces in Ygdramar away from Mara in mid-game she would have likely won the Battle of Arabel and claimed the lead.

It remains to be seen how the next game will go.  With two victories under his belt, Mara is set to claim the crown.  However, Holak is in a very close second and could overtake with just one well-played game.  As a result, it’s up to Holak if she wants to challenge him or if this is the way it all ends.  I guess we will wait and see. 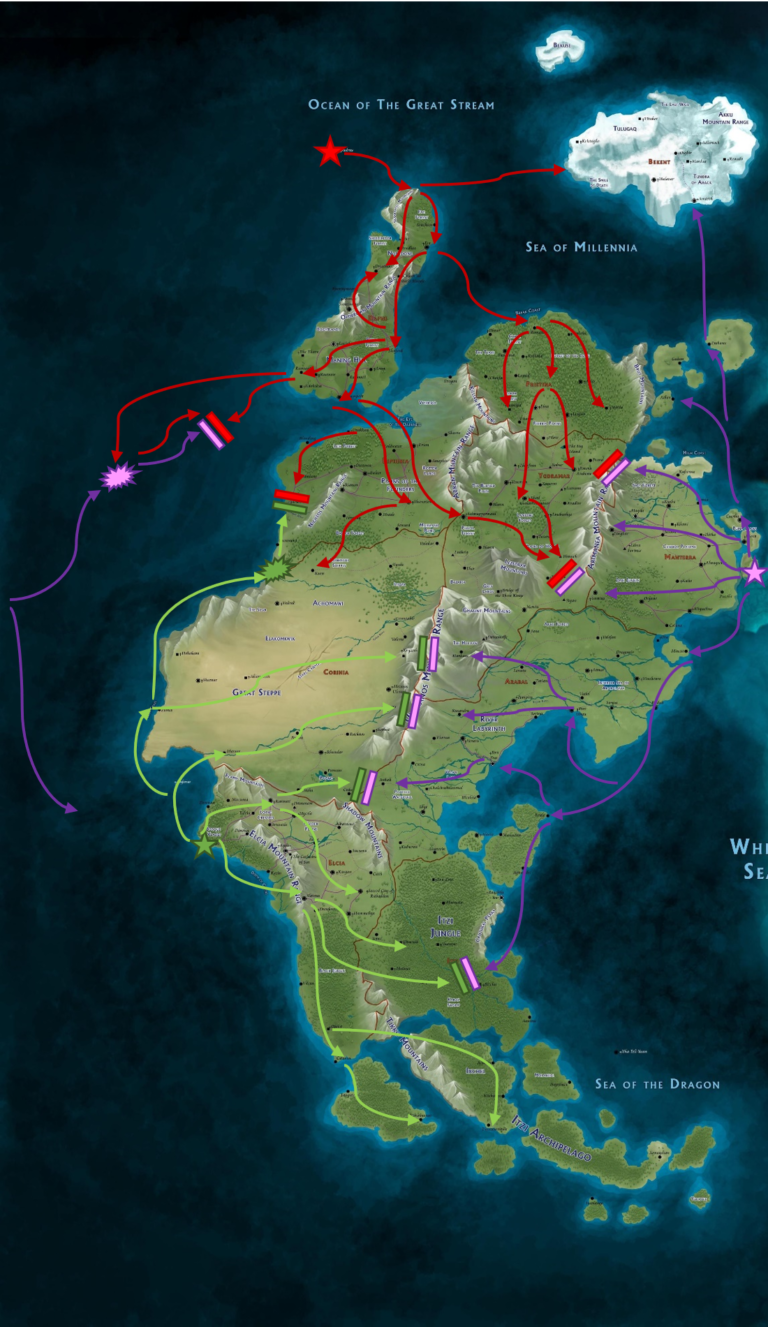 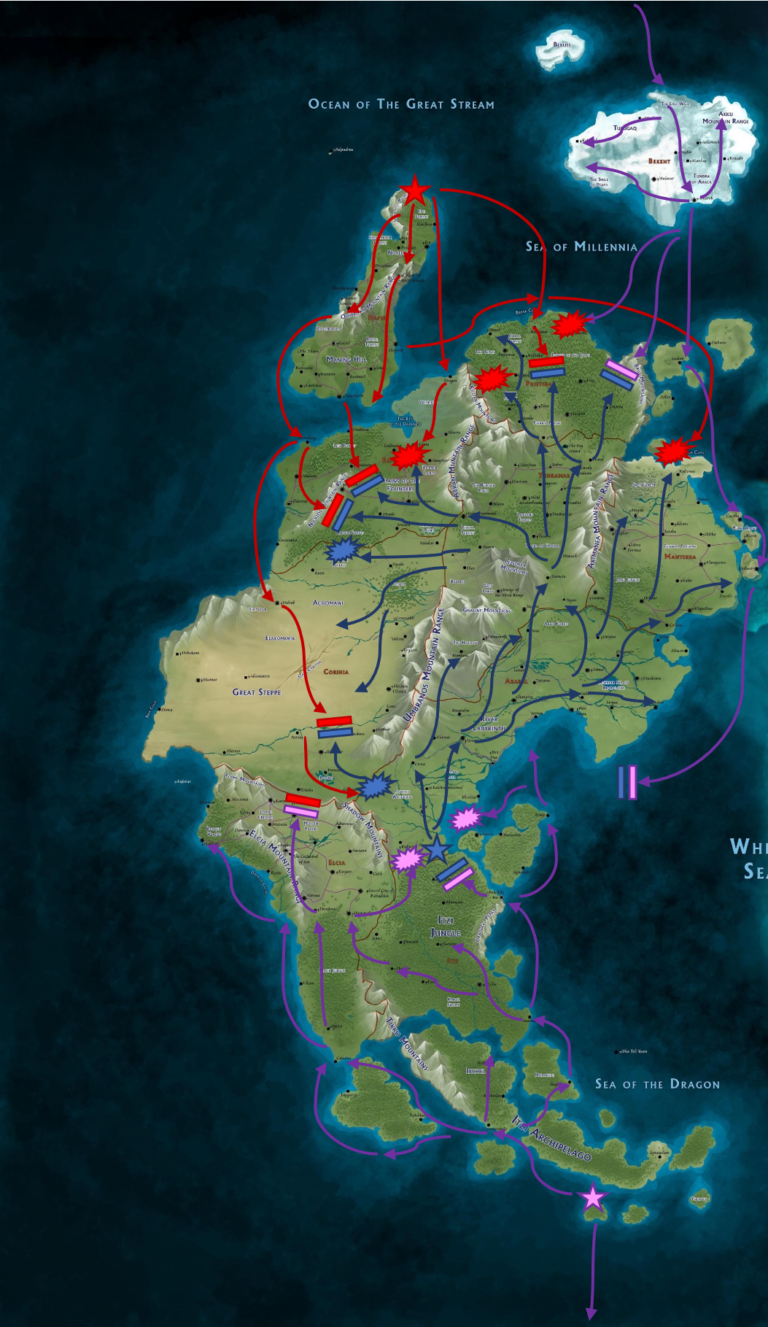